From NovaRoma
Jump to: navigation, search

This article is a stub. Can you help by expanding it?

"Iuppiter (alt. spelling Juppiter or Jupiter ) is the God of the sky, governing all that dwells within (i.e. the moon, the winds, the rain and the thunder), who became king of the Gods after overthrowing his father Saturnus. The ancient name of Iuppiter was Diespiter, whose root is Dios (= Zeus, God) + Pater (= Father). As Iuppiter Optimus Maximus, he is the tutelary God of Rome. As a warrior, he is Iuppiter Stator, protector of the City and State who exhorts soldiers to be steadfast in battle. But Iuppiter has many aspects, attributes, names and epithets.

Iuppiter originated as a vocative compound of the archaic Latin vocative *Iou and pater ("father") and came to replace the archaic Latin nominative case *Ious. Jove is a less common English formation based on Iov-, the stem of oblique cases of the Latin name. Linguistic studies identify the form *Iou-pater as deriving from the Indo-European vocative compound *Dyēu-pəter (nominative: *Dyēus-pətēr meaning "O Father Sky-god"). Older forms of the deity's name in Rome were Djeus-pater (“day/sky-father”), then Diéspiter. Djeus is the etymological equivalent of Greece's Zeus and of the Teutonics' Ziu, gen. Ziewes. The Indo-European deity is thus the god from which the Greek Zeus and the Vedic Dyaus Pita are derived. The name of the God was also adopted as the name of the planet Jupiter, and was the original namesake of Latin forms of the weekday now known in English as Thursday but originally called Iovis Dies in Latin, giving rise to jeudi in French, jueves in Spanish, joi in Romanian, giovedì in Italian, dijous in Catalan, Xoves in Galego, Joibe in Furlan. 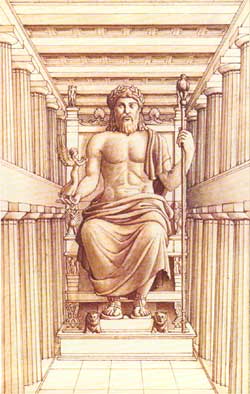 Iuppiter was given many names.

Iuppiter Feretrius ("who carries away the spoils of war"; called upon to witness solemn oaths - cf. "by Jove"). The epithet or “numen” is probably connected with ferire, the stroke of ritual as illustrated in foedus ferire, of which the silex, a quartz rock, is evidence in his temple on the Capitoline hill, which is said to have been the first temple in Rome, erected and dedicated by Romulus to commemorate his winning of the spolia opima from Acron, king of the Caeninenses, and to serve as a repository for them. Iuppiter Feretrius was therefore equivalent to Iuppiter Lapis, the latter used for a specially solemn oath.

By synchronisation or geography:

Jupiter Capitolinus, the Jupiter Optimus Maximus, venerated in all the places in the Roman Empire with a Capitol (Capitolium)

Iuppiter Dolichenus (from Doliche in Syria, originally a Baal weather and war god), since Vespasian popular among the Roman legions as god of war and victory, esp. on the Danube (Carnuntum). Stands on a bull, a thunderbolt in the left, a double ax in the right hand.

Iuppiter Indiges (Jupiter "of the country" - a title given to Aeneas after his death, according to Livy)

Iuppiter Parthinus or Partinus (Jupiter was worshiped under this name on the borders of north-east Dalmatia and Upper Moesia, perhaps being associated with the local tribe known as the Partheni)

Iuppiter Poeninus (Jupiter was worshiped in the Alps under this name, around the Great St Bernard Pass, where he had a sanctuary)

Iuppiter Solutorius (a local version of Jupiter worshipped in Spain; he was syncretised with the local Iberian god Eacus)